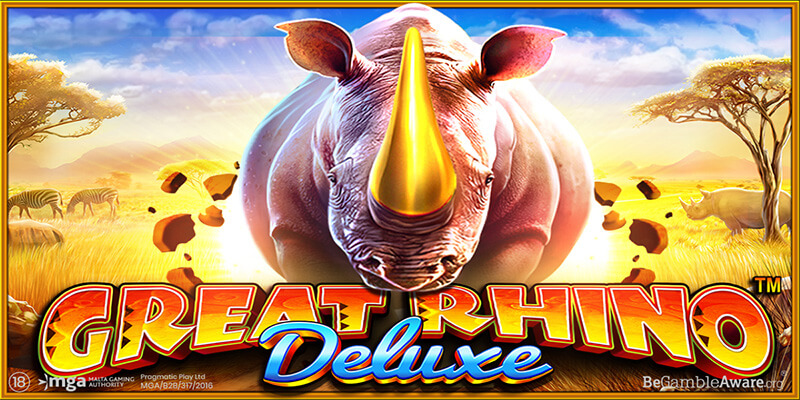 Pragmatic Play have today announced the release of the third instalment of their Giant Rhino slot series with Giant Rhino Deluxe now being available at all online casino operators which carry their game content.

With a reported RTP of 96.50%, Giant Rhino Deluxe is a 3 row by 5 reel slot that offers 20 paylines in play, featuring the well known safari theme of the Serengeti. The symbols in play in Giant Rhino Deluxe being depicted by a variety of wild animals and golden rhino coins acting as expanding wilds.

If two or more full stacks of thundering Rhino symbols land, the Super Respin Feature is triggered. A 2x multiplier is added for every additional Rhino that lands during the bonus. If every reel is filled with a Rhino, players are awarded the Grand jackpot, which is fixed at 500x a player’s stake, while the maximum multiplier win goes up to x6,242.

Speaking about the release of Giant Rhino Deluxe, Pragmatic Play’s Chief Commercial Officer, Melissa Summerfield said: “Great Rhino Deluxe is the newest addition to our growing series of titles under the Great Rhino umbrella. Taking a classic fan-favourite and adding innovative new features allows us to continue to grow an exciting franchise.”

“We continue to refine our craft and endeavour to create immersive slot experiences for all of our titles and Great Rhino Deluxe is no exception. We look forward to seeing how it is received by our fans and operator partners alike.”