Full Steam Ahead with Orient Train from Swintt 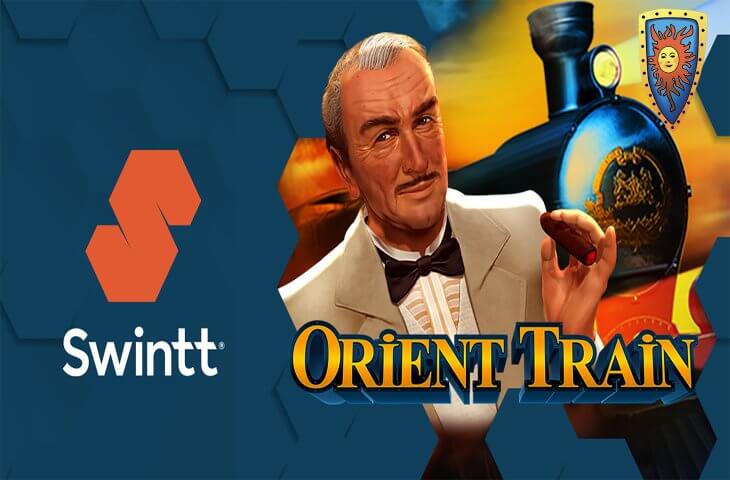 Having already journeyed through the Jurassic jungles of Book of Dino Unlimited, the casino game software provider Swintt is getting back on the rails for another exciting adventure this month as it invites players to punch their ticket and climb aboard the lucrative Orient Train.

The latest slot in studio’s popular series of Premium Games, Orient Train is a five-reel, five-payline title that’s linked to three rewarding local jackpots. Set to an opulent backdrop that invokes the wealth and prestige of the decadent railroad service that ran across continental Europe and western Asia, players will be transported to a land of luxury where regular wins of up to 1,000x their bet are possible.

Unique symbols to feature in the game include two glasses of top-shelf tipple, an ornate ticket punch, a gold-plated card case and a debonair railroad passenger, with the last of those beautifully-illustrated icons acting as the game’s wild and substituting for all other symbols to create more winning paylines.

In addition to that highly thematic line-up, players will also need to keep an eye out for the steam train scatter symbol, as this is key to activating the slot’s main Railroad Feature. Triggered whenever three or more scatters appear in view, coin symbols will be added to the reels as a series of respins begin.

With each coin displaying a multiplier value, whenever players land one of these special symbols they will be given three additional respins. So long as they collect another coin during these respins, this process will repeat until all 15 reel spaces are filled – and if they don’t, the feature will come to a halt.

Either way, at the end of the Railroad Feature, the multiplier values of all coins in view will be added together and a prize will be awarded. As an extra twist, however, some coins will display the name of the Minor, Major and Maxi local jackpots. Should players manage to collect up to three matching jackpot coins during the feature, they’ll instead win the corresponding prize listed on top of the reels.

As a final incentive, any winnings collected during the base game can be gambled in Orient Train’s Risk Feature. An ever-present aspect of Swintt’s Premium Games, this optional extra allows players to double or quadruple the value of their current prize by correctly guessing the colour or suit of a playing card respectively. Multiple Risk rounds can be played, with new prizes being recalculated after each.

David Mann, Chief Commercial Officer at Swintt, said: “With Swintt’s new Orient Train release, we’re going full steam ahead as we invite players to ride the railroad to riches and punch their ticket for the chance to win one of three local jackpot prizes.”

“As the latest slot in our popular Premium series, Orient Train combines the simple pick-up-and-play appeal of a land-based casino slot with beautifully designed visuals and a hugely rewarding Railroad Feature – and we’re very much looking forward to welcoming players aboard in the coming weeks!”