Eye of the Storm Video Slot 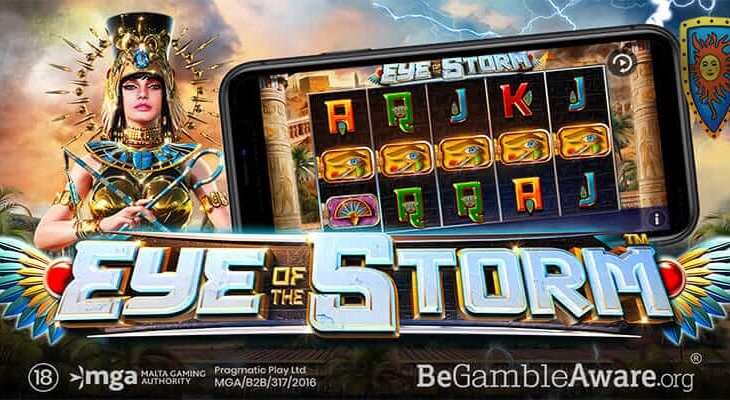 The Malta based casino software studio Pragmatic Play kick off the start of this new week with their latest online slot release in the form of Eye of the Storm, billed as an epic journey through Ancient Egypt.

Now Egyptian themed slots seem to adorn online casinos and well as their land based bricks and mortar cousins, I mean everyone has heard of Cleopatra and Pharaoh’s Fortune to name but two. So does Eye of the Storm actually offer  anything new and innovative that will whet players appetite for yet another Egyptian themed slot game?

Developed in collaboration with the casino game studio Reel Kingdom, Eye of the Storm boasts a captivating and dramatic soundtrack to go alongside the crisp graphics that this highly volatile video slot game employs.

Playing over 5 reels and 3 rows and offering a reported  RTP ( Return to Player ) of 96.71% over ten paylines in play, according to the Press Release issued by Pragmatic Play, players are tasked with searching for the Queen’s treasure among the mysterious temples as a dangerous storm looms upon the reels.

The gameplay features the use of ancient artefacts on the reel symbols, with the Eye of Ra symbol being the most rewarding, paying 10, 20 or 50 times the player’s stake for three, four or five in combination.

Eye of the Storm comes with an Expanding Wilds feature which, when the Cleopatra wild lands and could lead to a win, will be activated to give you a fully wild reel.   Free Spins are triggered by landing three or more pyramid scatter symbols anywhere on the reels, and with an unlimited re-trigger feature, the luckiest players will benefit from free spins.

Eye of the Storm arrives hot on the heels of recent hitsMadame Destiny Megaways™, Congo Cash and Emerald King Rainbow Road,bolstering Pragmatic Play’s impressive slot portfolio that has been developed for players of all skill levels.

Commenting on the release of Eye of the Storm, Pragmatic Play’s  Chief Business Development Officer Yossi Barzely stated: “Eye of the Storm is another fantastic addition to our offering in partnership with Reel Kingdom. “

“With alluring gameplay and a host of bonus features unique to this title, this title really brings something new to our library of premium slots. We expect it to go down a treat with our players.”

Should you wish to try out Eye of the Storm for yourself, you can do so at Videoslots here, who have been accredited on Casinomeister for several years now and have picked up several awards to include Casino of the Decade back in 2019. For further information see our Videoslots casino review.