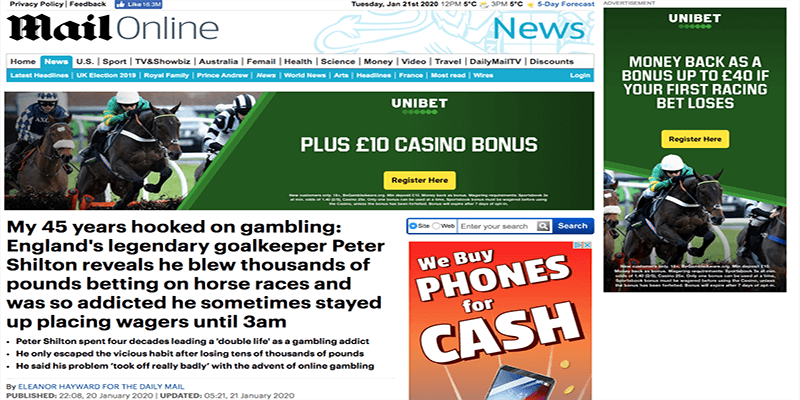 England and Nottingham Forest goalkeeping legend, Peter Shilton, has opened up about his battle about gambling addiction to the Daily Mail newspaper, in what now seems like a daily series of articles being published by the UK tabloid, in attacking the industry.

Instead of focusing on positive responsible gambling measures which have been put in place by operators and by the regulator, the UKGC, the Daily Mail has over the past few days been publishing stories which have been critical of the industry at large.

The latest story concerns that of former football goalkeeper Peter Shilton, who has revealed to the paper he has struggled with a gambling addiction for over 40 years, but subsequently kicked the habit into touch, just over four years ago in 2015.

In the piece with the Daily Mail, Shilton states: “I’ve won at most things in my life, in terms of my career, but I’ve never won at gambling. I didn’t realise I was an addict until I finally stopped. When I was working I was always ultra-professional and nothing would interfere with the football.”

“But when you’re a footballer you have a lot of spare time on your hands after training. It’s easy to sit around and gamble.”

The most capped English footballer, also goes on to state that last week he and his wife met with the Sports Minister Nigel Adams and Arts Minister Helen Whately, to discuss problem gambling.

Unfortunately what the Daily Mail article fails to address are the measures which have already been put in place to help battle gambling addiction in the UK. As well as GamStop, which can be used to self exclude from UK licensed iGaming operators, the BetBlocker app is also a very good piece of software, which the mainstream media should publicise.

Furthermore, all the main high street banks now enable you to block gambling transactions on your bank cards. Yet another good facility, which allows players to take back control.

Whilst the story of Shilton’s battle against his gambling demons is a sad one and is worth publicising. The onus surely is on the mainstream media to also publicise measures already taken and available, that help and enable players take back control. Most of which are to be found fully supported by the industry in the UK.