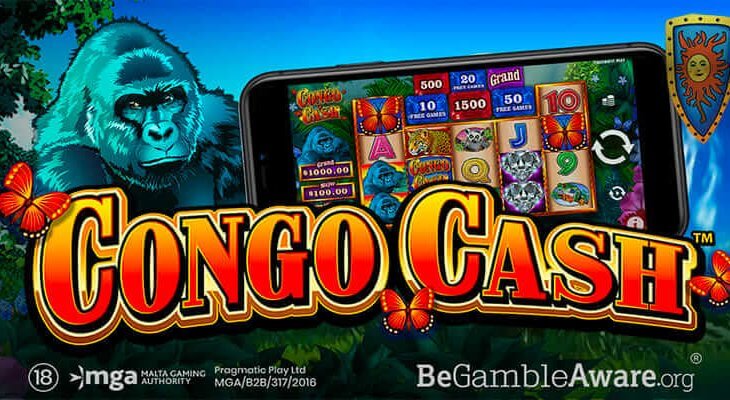 Malta based Pragmatic Play who last year kept up with a busy schedule of releasing new game content pretty much every week, are continuing to do the same in 2021, following up their release of Emerald King Rainbow Road at the beginning of this week, with the release of  the video slot Congo Cash.

Congo Cash has been developed by Pragmatic Play in conjunction Wild Streak Gaming a Las Vegas based casino game studio who boast a pretty impressive portfolio of games in their own right. With Wild Streak Gaming developing games across a variety of channels, to include land based, online and social.

Playing over 5 reels and featuring 432 ways to win, Congo Cash has a reported RTP of 96.51% and a potential maximum win on a single spin of 5,500 times your stake. Congo Cash  is in essence a fairly highly volatile slot to play and takes players to a dense jungle environment where they can try an unlock the potential big wins the game has on offer.

The Butterfly and the Congo Cash symbols can land players one of the huge money prizes displayed on the jewels above the reels. Congo Cash also features three available jackpots – Minor, Major and Grand, with plenty of adventure awaiting in the Free Spins mode, which can be triggered if three Scatter Symbols land on the reels.

Players can receive anywhere from eight to 100 free games on this slot, and when all of their free spins are used, the free game finishes and the player is returned to the base game.

Speaking about the release of Congo Cash which you can play now at Videoslots, of which we have reviewed here, Yossi Barzely, Chief Business Development Officer at Pragmatic Play, said: “While it may be difficult to travel at present, this won’t stop slot lovers from getting a real taste of the tropical in our enticing new title, Congo Cash.”

“Filled to the brim with jackpots and free spins, players have every chance of leaving the jungle with their pockets filled with untold riches.”