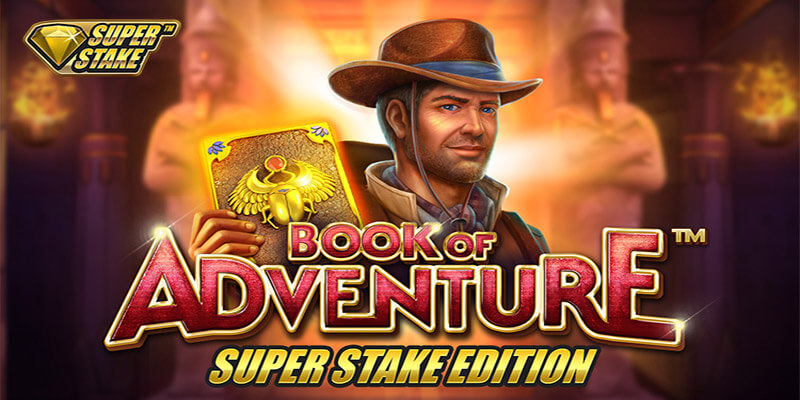 Hot on the heels of releasing Dragons and Magic™ at the end of last week, the Malta based casino game developer Stakelogic have announced this morning the release of the Super Stake Edition of their popular slot Book of Adventure™.

The clone of Novomatic’s Book of Ra was originally launched back in 2018 and the new improved Book of Adventure™ Super Stake Edition enables players to effectively double their stake with every spin, thus improving their chances of triggering one of the game’s bonus features.

For those seeking even greater riches, the Super Stake feature allows players to effective double each bet and once enabled delivers insanely high payouts once in every 35 or so spins. For example, if the player stakes £1 per spin and activates Super Stake, a £1 side bet is also placed.

When Super Stake kicks in, it will trigger one of the game’s bonus features to deliver a payout that would amaze even the richest Egyptian gods. In Book of Adventure TM Super Stake Edition, this  randomly awards between 5 to 15 free spins with a special expanding symbol.

Stakelogic has built a reputation for developing game-changing features, including Quattro which allows players to play up to four games simultaneously. This approach to slot development, plus the striking design and complex math used in its games, allows Stakelogic to stand out from its rivals.

Stephan van den Oetelaar, Chief Executive Officer of Stakelogic, said: “Super Stake allows players to seek out the biggest possible win potential by unlocking one of the game’s bonus features with a very regular hit rate, taking the excitement to the next level.”

“We have combined Super Stake with one of our most popular online slot launches to date, Book of Adventure TM, adding a whole new element to the game and to provide a new experience for those that have played the game before.”

About the Author... Total Posts Written: 673