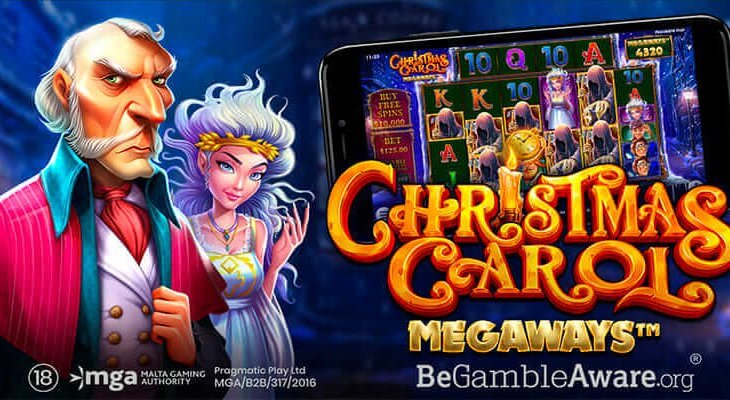 You know the festive season is nearly upon you when the casino game studios start releasing their end of year seasonal slot games. Well Pragmatic Play have got in on the act with the release of Christmas Carol Megaways™, based on the Charles Dickens Novel ‘A Christmas Carol’ and featuring of course the one and only Scrooge.

Just a few days before the start of December, Christmas Carol Megaways™ is billed as Pragmatic Play’s ‘Festive Hit’ of the year and offers players a mammoth 200,704 ways to win and cascading reels, which come alive upon each win hit.

Four or more Scatter symbols, represented by a golden timepiece, will trigger the Free Games feature, where players can choose their allocation of free spins and starting multiplier, while also having a mystery option. Will players be daring and take the higher starting multiplier and low spins, or look to build up their multiplier through the longer duration of spins?

During the Bonus Round, each win triggers not only a tumbling feature but also increases the multiplier by x1, which remains throughout the duration of the entire Free Games mode.

“With a widely recognisable and a potentially lucrative Bonus Round, our Christmas hit will have players hoping the magic of the season never ends.”

Christmas Carol Megaways™ is live now at all accredited Pragmatic Play casinos featured here on Casinomeister, including Videoslots of which you can read our review of them here.