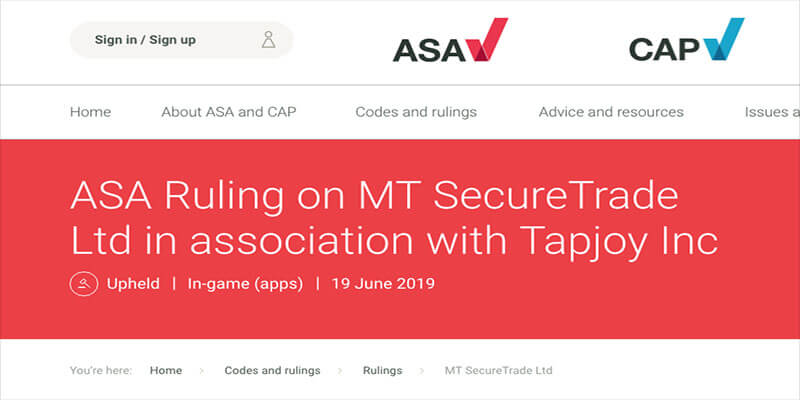 MT SecureTrade censured by the ASA

MT SecureTrade Ltd the owners and operators of several online casinos, such as Guts and Rizk have been censured by the UK’s ASA ( Advertising Standards Authority ) in relation to an advertisement run by one of their American based affiliates.

The advertisement in question was for a Dunder Casino gambling app entitled “Looney Tunes World of Mayhem” which according to the ASA  ‘gave players the opportunity to earn “gems” to use in the game by viewing ads or performing tasks.’ Furthermore the text stated: “Deposit £20 at Dunder and get 200 Free Spins. 1. Open an account at Dunder. 2. Deposit £20. 3. Enjoy your Welcome Offer”. Smaller text stated “*New Customers only. **Players must be 18+”. Beneath this was a button that stated “Earn [gem emoji] 3360”

As a result, the Advertising Standards Authority challenged whether the advertisement was appropriately targeted. In their defence it was announced that the ad in question was placed by an affiliate, a US company Tapjoy, Inc. Subsequently the partnership with said affiliate has been terminated.

However, the ASA has upheld the complaint about the advertisement with the following reasoning: “The ad appeared in the app “Looney Tunes World of Mayhem”, which had a rating of PEGI 7 in the UK Google Play app store, meaning it was suitable for players aged 7 and up. The game allowed players to build worlds and situations based on the Looney Tunes cartoons and collect characters to “battle” each other.”

“Given the use of cartoon characters, cartoonish violence and the relatively simple nature of the game, we considered it was likely to appeal to many under-18s. However, we acknowledged that the characters would be well-known to older players, and the game was likely to have more general appeal.”

“We understood that the ad had been labelled as “mature-gambling”, and therefore should only have appeared in apps that had specifically opted in to receive “mature-gambling” content. According to Tapjoy, “Looney Tunes World of Mayhem” had been marked to display “mature-gambling” ads in error. We acknowledged that action had been taken to correct this promptly, following receipt of the complaint.”

With the ruling from the ASA further going on to state: “We expected MT SecureTrade to have used some additional interest based factors to reduce the likelihood of under-18s seeing the ad. We noted that the Tapjoy platform allowed advertisers to target their campaigns using interest-based data inferred from the gaming preferences and self-reported demographic details. However, MT SecureTrade had not chosen to engage those options. We concluded that the ad had been inappropriately targeted and breached the Code.”

With the ASA stating that both MT SecureTrade Ltd and Tapjoy, Inc. are to ensure that ads were appropriately targeted in future.