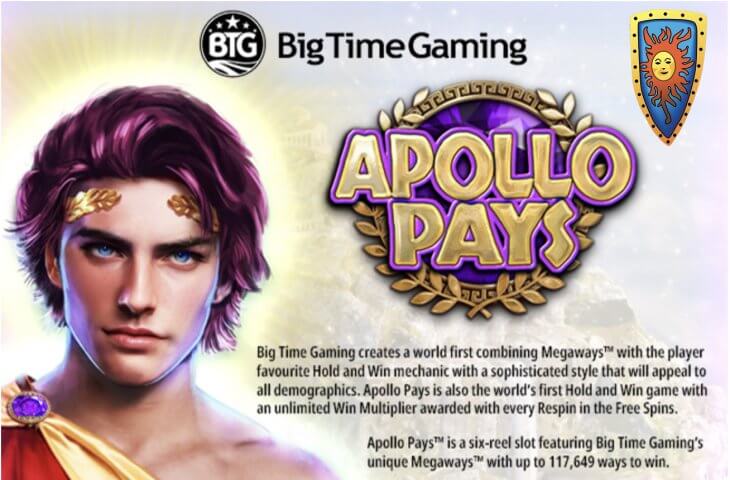 The Australian casino game studio Big Time Gaming who are renowned for the creation of their Megaways game mechanic, have announced the release of their latest creation titled Apollo Pays, with high hopes that this game will whet the appetite of players.

Apollo Pays which went live with operators who carry Big Time Gaming casino game content yesterday on 16th February, is a high variance slot game that over six reels in play, features 117,649 ways to win and transports players to the world of Greek Mythology.

According to the marketing information sent out by Big Time Gaming, Apollo Pays is set over Mount Olympus, the mythical home of the Ancient Greek God Apollo. With Apollo’s home being a beautiful castle with magical lagoons and waterfalls. Many people come to Apollo with a mission in mind, to uncover the hidden treasures of Mount Olympus. Certainly this is borne out by the look and feel of the slot,

Incorporating the Hold and Win mechanic, Apollo Pays also happens to be the first such slot game to feature Hold and Win that offers an unlimited win multiplier awarded with every respin in the free spins bonus round.

The free spins feature is awarded when three or more scatter symbols are hit in the base game, whereby 10 free spins are awarded.

Additional scatters hit offer a further 2 free respins. The win multiplier starts at 1x on the first respin, increasing incrementally with each further respin played. Further respins can be awarded by hitting three or more scatters, with no ceiling in place to the number of free respins allowed.

Being a high variance slot game, it can seem it takes quite a while to hit the free spins bonus feature, but in essence that is to be expected, especially as the potential wins available once the free spins feature is activated are considerable.

Apollo Pays has a reported default RTP of 96.56% and also offers a potential maximum win of over 100,000 times your bet stake, when in the free spins bonus round.

If you want to try out Apollo Pays for yourself, have a look at Unibet who carry game content from Big Time Gaming. For further information concerning Unibet who are accredited here on Casinomeister, check out our review of Unibet here.