Another Book of Ra Themed Slot You Say? 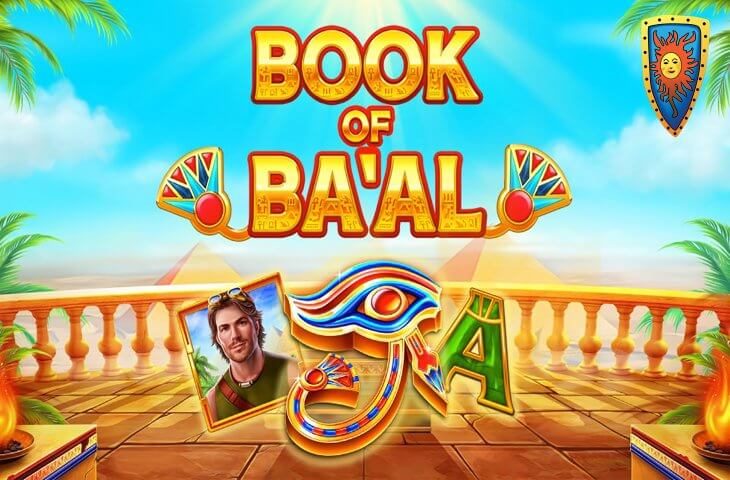 Now for those of you that consider yourself an aficionado of land based casinos and the slot machines that populate them, then no doubt you will have encountered many a time the  Novomatic cabinet hosting the popular Book of Ra slot. With the Egyptian themed Indiana Jones-Esque slot proving to be one of the most endearing on the casino floor, known for paying out some handsome wins.

For many years now this has not been lost on the operators of online casinos, with many casino game studios servicing  said online operation’s quest for similar popular slots, by cloning many of the slot games that initially found fame in the bricks and mortar world, with Book of Ra being high on this list.

Well enter another Book of Ra themed slot, this time from 1X2 Network’s casino game studio Iron Dog Studio who have released the latest slot in their “Book of” Series, with Book of Ba’al.

Players are being encouraged to join an intrepid explorer as he ventures deep into the Pharaohs’ mysterious tombs located beneath the ancient Egyptian Pyramids in Book of Ba’al, which is billed as the latest blockbuster slot from 1X2 Network.

Designed and developed by the provider’s Iron Dog Studio subsidiary, the game is the latest in the popular “Book of” series. The slot offers up a trove of treasures including Wilds, Expanding Symbols, Scatters and of course Free Spins.

Players will want to keep their eyes peeled for the special Book symbols as when three, four or five land on the reels during the base game, up to ten Free Spins are awarded.

During Free Spins, players put their fate in the hands of the gods, leaving them to decide on the special Scatter symbol that will appear. Landing the symbols causes them to expand across their reels before scattering across the entire game board.

When they do, they pay if they land on an active win-line, pushing players ever closer to achieving the game’s maximum win of 5,100x their original bet.

The Book symbols also form part of a new collecting feature that will help players gain the luck of the Scarab. Once a Book has been collected, it sits at the side of the reels.

When the player collects a total of 25 Books, a bonus Free Spin is awarded. Before the Free Game plays out, a special Scatter symbol is chosen which transforms all symbols on that reel. During the spin, players have the chance to win even more Scatters.

Rory Kimber, Account Management & Marketing Director at 1X2 Network, said: “Book of Ba’al is the latest title in our popular ‘Book of’ series and takes players on an Egyptian archaeological adventure like no other. As players delve deeper into the ancient tomb, they will move closer and closer to discovering the treasures within.”

“The Book symbol is the one they will most want to find. Not only does it trigger the game’s Free Spins bonus but once the player has collected 25, the special Free Game round is launched where symbols transform and scatter to provide incredible big-win potential.”

“Book of Ba’al provides all of the excitement and adventure of being an intrepid explorer and combines it with the chance to walk away with riches of that of the great Pharaohs. What’s not to like!”

Should you wish to try out Book of Ba’al and find out for yourself if it is as good as 1×2 Network and Iron Dog Studio would wish you to believe, then check it out at Bitstarz Casino who feature the full complement of games developed by Iron Dog Studios.