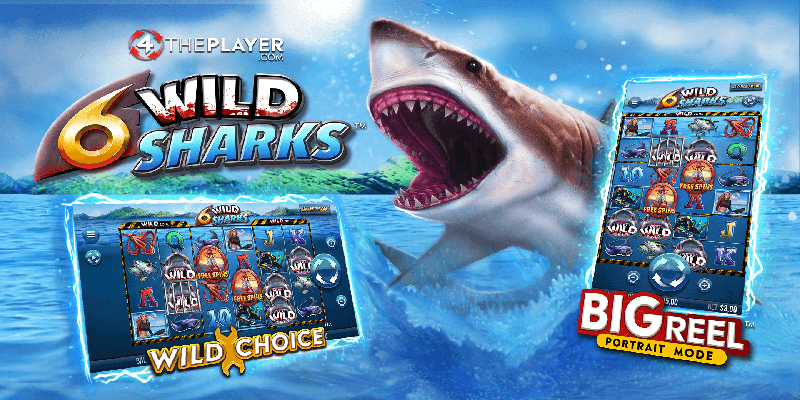 As already previewed by  Dunover in the Casinomeister forum here, casino game creator 4ThePlayer have released their latest slot game, 6 Wild Sharks, which will be  exclusively available initially with LeoVegas, before going on general release to all operators that carry their content on 10th September.

6 WILD Sharks is the latest 4,096 Ways Slot by 4ThePlayer.com  which incorporates and showcases the WILD CHOICE™ feature, a feature that puts the player in control of the action!

Andrew Porter the Chief Executive Officer of 4ThePlayer speaking about the release of 6 Wild Sharks, said: “This game allows players to interact with the game play like never before, controlling the volatility to exactly how they like it. Firmly putting the player in control.”

While LeoVegas’s Casino Operation Manager Johan Ekberg, commenting on the release of  6 Wild Sharks of which LeoVegas will carry exclusively until 10th September, stated: “Were very excited to have 4ThePlayer’s latest release “6 Wild Sharks” as an exclusive at LeoVegas. The “Wild Choice” mechanic really puts the journey into the players hands, allowing you to play with a strategy which suits you best.”

“The addition of the optional “Big Reel” portrait mode on mobile devices shows that 4ThePlayer share the LeoVegas vision of a mobile first product which provides the greatest gaming experience. Something which we are always excited to see and support wherever we can.”