As Eurovision Approaches We Look At 5 Singer-Based Slots To Try!

Eurovision is fast approaching, and that means we’ll be inundated with cheesy songs, singers past their prime, and acts no one has ever heard of. To ease your pain, we’ve decided to write a post around some good music talent – all of whom have been made into video slots. If you’re like us, you’ll do anything you can to escape Eurovision, so why not consider giving one of these games a try for yourself! Let us know in the forum what your favourite music-themed slots are as well! 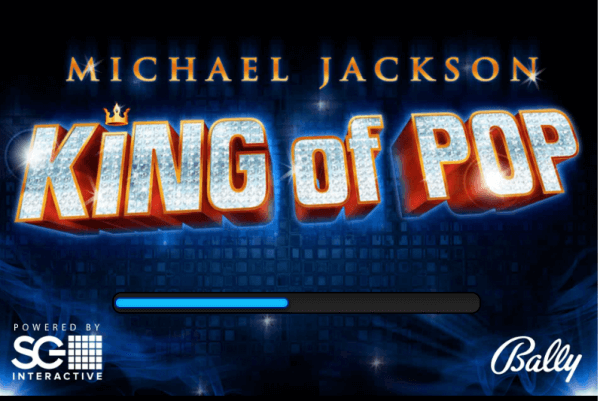 Michael Jackson is one of the most famous singers and performers in recent history, and it’s no surprise that WMS (Williams Interactive) decided to build a slot all around his musical legacy. Michael Jackson King of Pop is a game from WMS. Featuring an RTP of 93.00% the slot is based around a 5-reel, 3-row format and there’s a total of 25 fixed paylines. The game offers players three different bonus features. The first is a randomly triggered feature and can occur on any spin during the base-game. When this happens you’ll see Michael himself moonwalk across the screen. He will then leave behind between 2 and 5 wilds symbols. (Any win formed using these wilds is subject to a 2X multiplier.)
The second bonus is also triggered randomly during the base-game. When it activates, either one or two reels will be transformed into wild reels. The third (and main) bonus feature is triggered by landing three of the BONUS scatter symbols on reels 2, 3 and 4. When you manage to do so you’ll be taken to a new game screen. Here, you’ll get to spin a giant Wheel of Fortune to win one of the following prizes: 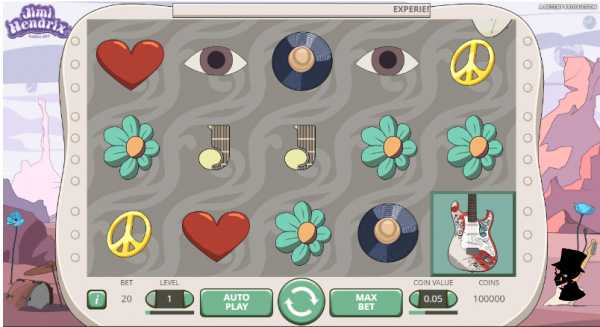 Jimi Hendrix is one of the world’s best-known musicians – and for good reason. His unique style of guitar playing made him a huge influence to millions of guitar players around the world, and it’s no surprise to see that NetEnt have themed an entire video slot around him! This fast-paced slot features a soundtrack which uses Jimi’s actual songs – and this lets you play alongside him! The game is packed with exciting bonus features, and the main one is called the Pick and Click feature. This is triggered by landing three of the scatter symbols on reels 3, 4 and 5.

You’ll then get to pick from 12 loudspeakers on the screen, continuing until you match three identical symbols. This will award you either a Coin Win, the Crosstown Traffic Free Spins, the Purple Haze feature or the Little Wing Free Spins.

The Crosstown Traffic Free Spins awards you with 6 free-spins. During the bonus, a reel is chosen on each spin to become wild. Up to three reels can transform into wild reels on each spin, leading to some great win-potential.

The second bonus is called the Purple Haze Free Spins. This awards you between 6 and 12 free-spins. During the spins, the playing card values, including 10, jack, queen, king, and ace (the game’s lower-paying symbols) are all transformed into wilds.

Dolly Parton is a universally-loved figure, famed for her unique voice and her good looks. Leander Games have released their own slot based around the country icon, and as you’ll soon see it’s definitely a well-made game! The main attractions in the Dolly Parton slot (aside from the soundtrack) is undoubtedly the bonus features. The first, called the Butterfly Super Extra Wild feature can trigger randomly on any spin during the base-game. When it does, you’ll see butterflies fly onto the screen, transforming reels 4 and 5 into wild reels.

The main bonus is triggered by landing three of the BONUS scatter symbols on reels 2, 3 and 4. Do so and you’ll trigger Dolly’s Wheel of Wealth Bonus. You then get to spin a giant Wheel of Fortune which will reveal one of three bonus features:

James Dean is a well-known actor and singer from the 50’s and 60’s, and he first rose to fame after his iconic appearance in the 1955 film Rebel Without a Cause. Unfortunately, Dead died young in a car crash… but that hasn’t stopped NextGen Gaming from honouring his legacy by producing a video slot all based around him! The game is great fun to play and is built around a 5-reel, 25-payline format. It’s packed with iconic symbols and images including his famous motorbike, and – naturally – there’s some pretty exciting bonuses and features to boot too.

Next up you’ve got the main Free Games feature. This is triggered by landing three or more of the James Dean scatter symbols anywhere in view. You will then receive 10 free-spins, and during the bonus all wins you manage to form are multiplied by 2X. Landing the Clapper symbol on reel 3 at any point during the bonus will award you 3 Legend Spins (see below).

As mentioned above, Legend Spins are accumulated during the main Free Games bonus, and they then play out after your free-spins have finished. During the Legend Spins all wins are subject to a 5X multiplier – and it’s possible to win up to 20 Legend Spins so there’s plenty of good win-potential on offer!

The final bonus is the James Dean Pick Bonus, and this is triggered by landing three of the Purple James Dean scatter symbols anywhere in view. Do so, and you’ll enter a “pick me bonus” where you can win up to 150X your stake!

We’ve seen a number of Elvis-themed slots appear online – and WMS have produced a number of them. Elvis The King Lives was their first game based around the world-famous entertainer and singer, and it’s built around a really unique layout. There’s a 2X2 reel set with a 3X6 reel set attached – it looks a bit ‘crazy’, but once you get the hang of it you’ll see it’s pretty easy-to-use.

Now, along with Elvis’ music, the game boasts a number of exciting bonus features. The first of these is the Free Spins feature. This is triggered in two ways, uniquely. During the bonus, you’ll be awarded between 5 and 20 free-spins, and it’s also possible to re-trigger another 5 free-spins by landing 3 more Elvis Disc scatter symbols on reels 9, 10 and 11.

During the bonus (if you triggered it matching four identical symbols on the four leftmost symbol positions), the symbols that triggered the feature will be locked in place.

The game also boasts a Jukebox Feature. This is activated before you enter the main free-spins bonus. You will see a giant jukebox appear on your screen, and 4 classic Elvis songs. You simply pick one of the songs, and you can win up to 25X your total stake, along with some more free-spins.

Whatever your preferred style of music, you’ll find almost all of them encompassed in an online video slot. Play ‘n Go’s new Sabaton release is ideal for rock and metal fans, while Microgaming’s Phantom of the Opera is an ideal choice for those who like timeless operas. Let us know in the forum what your favourite music genre is – and let us know what your top-5 music-themed video slots are! 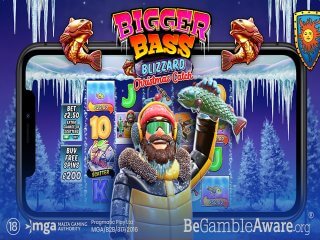