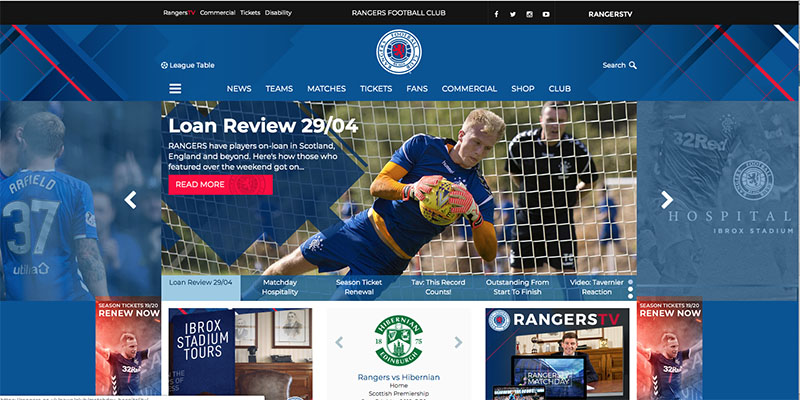 32Red and Scottish Premiership giants Rangers have announced this morning an extension of their successful partnership, which will see the Kindred owned 32Red continue to be Rangers shirt sponsors for a further 2 years.

32Red first sponsored Rangers back in 2014, when Rangers were in the process of climbing back up the Scottish League, after the club in 2012 were demoted unceremoniously to the Scottish 4th tier after the club’s much publicised insolvency.

The new deal with Rangers football club, will see the Gibraltar based and UKGC licensed online casino extend their association with the Scottish giants to 7 consecutive seasons and until the end of the 2020-2021 season.

32Red have over the past ten years been very active in sponsoring football teams, both north and south of the border. As well as Rangers, 32Red currently also sponsor English Football League sides Derby County, Leeds United, Aston Villa, Middlesbrough and Preston North End. In the past they have also been the principle sponsor of Swansea City and Crawley Town.

Speaking about the extension of the 32Red deal, Rangers Managing Director, Stewart Robertson, said: “We’re delighted to continue our relationship with 32Red for the next two seasons.  They have been a loyal supporter and partner of the club since 2014 and we are pleased that their brand will continue to be on the front of our shirts.”

Whilst Neil Bandbury, General Manager at Kindred Group added: “32Red’s partnership with Rangers has been hugely beneficial for our business and we are thrilled to have extended that association once again. At 32Red, we are committed to reinventing the sports sponsorship model, so it benefits the whole community. The extension of our relationship with Rangers will afford us a unique position to support the local community and those who need it most through initiatives such as the ‘Big Sleep Out’ which helped fundraise for Glasgow’s homeless.”

Only two weeks ago  Casinomeister News reported on the fact that 32Red had invested in the Derby County Community Trust, subsequently funding their mental health programme, Team Talk.

To further publicise the extension of the deal between 32Red and Rangers, former SBS Soldier and now star of Channel 4’s SAS Who Dares Wins, Ant Middleton, has been filmed receiving a Rangers shirt, with 32Red branding, from Scottish broadcaster and comedian Ewen Cameron.

Kindred’s Bandbury also further commented on the extension of the partnership with Rangers by stating: “Steven Gerrard’s appointment as manager at the start of the season, a Premiership title bid and the return of European football is exactly the opportunity we saw back in 2014 and we look forward to many more exciting days and nights at a packed Ibrox, like those we have been enjoying this season.

“We would also like to take the opportunity to thank all the staff at Rangers for their support over the last five seasons and we are excited to see where the next two take us.”