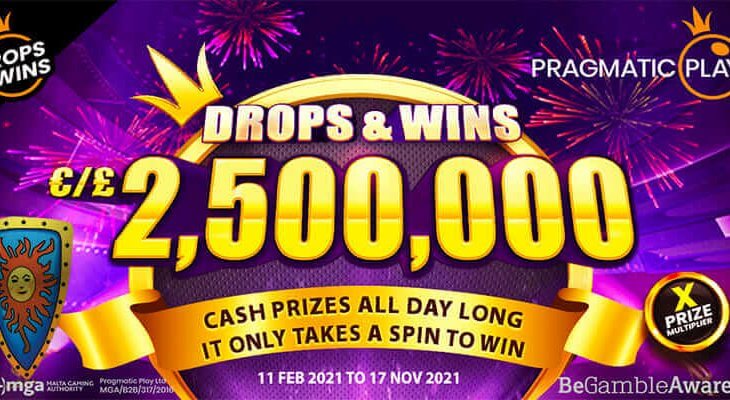 Malta based casino game studio Pragmatic Play who are behind online slots to include Great Rhino Megaways and the John Hunter series of slot games which can now be played at the award winning All British Casino, have today announced the commencement of their latest promotional series Drops & Wins.

Members of the forum here on Casinomeister will already be aware of the popular Social Tournaments which Pragmatic Play run, well Drop & Wins is another great promotion running until November which they will be able to take part in.

Starting from February 11th and running until November 17th, the supplier will give away €/£250,000 a month through Weekly Tournaments and Daily Prize Drops, all via its dynamic engagement tools.

Each weekly tournament runs from Thursday to Wednesday, incorporating the most popular and high- profile Pragmatic Play games, giving players the opportunity to play their favourite titles with even more win opportunities.

The tournament will reward players based on highest single-spin win amounts, adjusted to bet value, ensuring all can enjoy it and experience success, regardless of their staking levels.

Daily Prize Drops are randomly awarded to players in the participating games throughout each day for full ten months, with the promotion rolling simultaneously, giving those that opt in double the chances to be rewarded.

The entire campaign is managed by Pragmatic Play, with operators simply required to opt in before the process is smoothly handled through the supplier’s single API integration. Moreover, the auto-payout option is designed to make the promotion even easier for participating operators.

Speaking about the launch of Drops & Wins, Yossi Barzely the Chief Business Development Officer at Pragmatic Play, commented: “Our first Drops and Wins prize promotion was so successful, we’re bringing it back even bigger and better than before.”

“Giving €/£2.5m to our players over the course of the year will be hugely exciting and with so much up for grabs during the event, we can’t wait to reward Pragmatic Play fans.”

“With our intuitive backend ensuring that operator partners haven’t got to worry about a time-consuming process, we’re looking forward to this being our biggest promotion yet!”