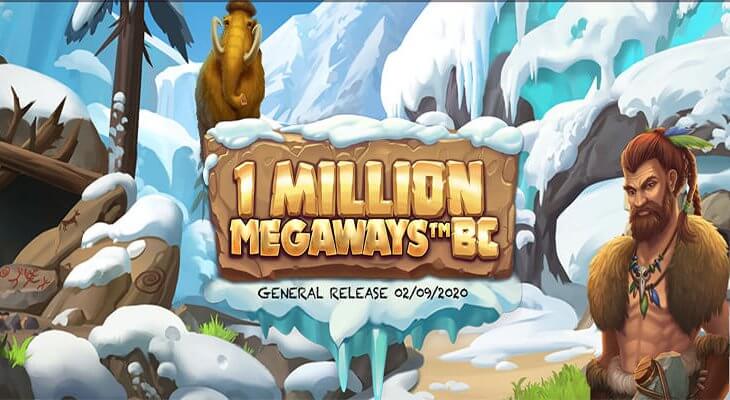 Iron Dog Studio who are part of the 1×2 Network have today announced their latest slot game, which takes on Big Time Gaming’s Megaways gaming mechanic, with 1 Million Megaways set to hopefully become a hit with players. Players at brands operated by the William Hill Group will be able to try out 1 Million Megaways in the first instance, as they have exclusivity of the slot, until it goes on general release on 2nd September next month.

Iron Dog Studio is taking players back in time and to the dawn of Megaways with its latest blockbuster release that becomes the first Megaways slot to offer more than one million ways to win.

1 Million Megaways BC takes players on a journey back to the Ice Age where the beasts, and the slots, run wild. But if they can survive this harsh and rugged environment, they are rewarded with up to 1,058,841 ways to win.

In the base game, every winning tumble increases the global multiplier up to a maximum of x8. Four tumbles in a row will trigger the Free Spins Bonus and given that there are 117,649 ways to win with every spin in the base game, players can enter the bonus with a x1,500 stake win.

Free Spins start with the ground trembling and the reels shaking, making way for the prehistoric “Mammoth Reel”. This is an additional reel which when caught expands to a terrifying height of nine symbols and adds an additional Multiplier, five extra Free Spins and a Sticky Wild.

During Free Spins another instantly recognisable feature that is activated is the Lock-it Reels system. When reels expand to their maximum height, they stay locked – either six reels with seven symbols or at nine when Mammoth Reels is active.

When Mammoth Reels and Lock-it Reels are both active, players are given a monster 1,058,841 ways to win with a maximum win of x45,000 their original stake.

1 Million Megaways BC will be available to operators in regulated markets around the world from 2 September, but has been pre released exclusively with the WHG.

This means players can access the game now via brands such as MrGreen and the UK-based WilliamHill.com, which will be featuring the 1 Million Megaways BC in a nationwide UK television advertising campaign later this month.

Kevin Reid, Chief Commercial Officer at Iron Dog Studio parent company, 1X2 Network, said: “1 Million Megaways BC is the first ever Megaways game to offer players more than one million ways to win. This, combined with or Lock-it Reels system, will deliver plenty of mammoth wins.”

“We are thrilled to be able to offer 1 Million Megaways BC to our operator partners, and for William Hill to be featuring it in its upcoming UK television advertising campaign. The game really does have what it takes to top the charts and we can’t wait to see players landing some beastly wins.”