In these times of increasing energy prices it has become paramount to utilize methods of savings and efficiency. The gambling industry is not traditionally viewed as a high consumer of energy but increasingly, members of the public have noticed the wastage seemingly occurring in pubs and casinos where gaming machines are not being used and in standby mode. One person complained "I go in the pub only to see an idle fruit machine against the wall with hundreds of bulbs continually flashing in cyclical fashion - surely this cannot be green in any way?"

A spokesman for BACTA (who deal with non-casino amusement-with-prizes games in the UK) replied "To be fair, most of these machines use low-wattage LEDs and not filament bulbs nowadays. The lights are in attract mode when the game is idle and use most when going through the faux jackpot-won sequence. We feel that as this is the only way a member of the public would ever get to see that particular display, it should be retained."

The same goes for land casinos whereby banks of unplayed slot games can often be observed with screens lit up and illuminated panels offering their options. Combined wastage has been worked out at approximately 0.5 kwh per slot per hour when this is the case. We asked a manager at a renowned casino in Central London to comment: "We can easily afford the wasted electricity with the returns they offer players. Furthermore, the overall appearance adds to the ambience of the slots room and to not have this would detract from the general casino experience for our customers."

When asked to comment, the under-secretary of the government's Culture and Media Department Lou Sawad seemed to disagree with the other views: "It's a scandalous waste of resources when ordinary people are making the choice right now between eat or heat. Just the wasted electricity from ten of those casino slot machines could keep one of our high-wattage patio heaters running outside our bar on the Thames waterfront on cool evenings. I actually visited one of those casinos during a departmental research outing and was faced with row after row of some grinning idiot in a hat, illuminated from behind. If that could be avoided for other patrons, we would all be winners."

The UKGC though has had enough it would appear. As from June 30 2023, all kinds of mechanical or video-based gaming apparatus must include, or be retro-fitted with sensor touch technology similar to that of smart phones. No illumination will be permitted prior to a potential player touching a reflective panel situated on the top left of each unit. At this point, the backlighting will illuminate for no longer than 25 seconds so they can see the game and design, or video screen. The only light permitted otherwise will be a permanent dim red LED ring around note or coin slots, maximum rating 0.5w - putting money in will switch all the displays on. Once a player collects any bank, within 10 seconds the game will go dark again, with the exception of the money illuminator as described above.

The UKGC have stated: "We have a responsibility like all other industries to minimise wastage and be energy efficient. Of course, we would rather nobody ever gambled and spent their money on their own domestic fuels and stayed at home, not gambling online either. In reality though despite our best efforts, people can still exercise the choice to gamble their money. If they do, we can assure you that their activities will be as green as possible."
Webmeister at Casinomeister - read my website review here: FastPayingCasinos

Location
the land of snow and maple syrup

well written and formulated
Even I, check the calendar these days

Casino Representative of the Year​

It may well be true....
Webmeister at Casinomeister - read my website review here: FastPayingCasinos

Location
the land of snow and maple syrup

Casino Representative of the Year​

I’m forever wishing that someone from the UKGC maintains a silent presence on this site…until now.

I was just thinking to save paper and trees gambling businesses need to switch from silky andrex to a more environmentally friendly product - izal, or maybe this for the ukgc offices 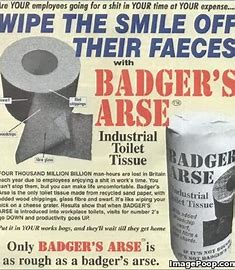 Official The UKGC is officially considered 'not fit for purpose'!

S
Done with Mecca/Grosvenor, any recommendations for casinos ?

Poll Source of Wealth poll: How do the SOW requirements affect you? 2022
2 3

Users who are viewing this thread