BonanzaGame is its name – effin’ up players is its game 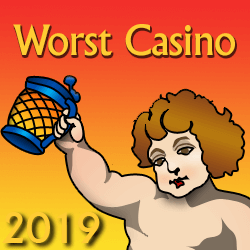 There are craphole casinos, and there are Shithole Casinos. The crappiest of the crap make it to this page where we have divvied out the awards to the most deserving shitholes of a casino. This year was no different – most of the oozing of crap was from the sunkissed island of Curacao.

From the desk of Max Drayman, Casinomeister complaints manager:

Over the course of 2019 we received a lot of complaints regarding BonanzaGame.com, typically regarding account balances that are confiscated for feeble reasons, usually after the player had won a cash prize or scored a significant casino win.

When the player complains the casino promises to reinstate the player’s balance, except they don’t. They hold the money somewhere outside the player’s account — the player has no access to the money wherever it is — and promise to pay it out in small installments. Sometimes a few small payments to the player are actually made, often not, but either way they dry up soon enough and the player is getting nothing.

When the player complains about the broken payment agreement the casino says “be patient”, “wait for the money to arrive”, etc. Whatever they say or promise the balance is never returned and soon enough the casino simply ignores the player, often closing the account so the player can’t access the casino.

Understandably frustrated players have turned to us and other arbitration services for assistance. The casino never responds in any way, totally ignoring all efforts, and nothing is done to resolve the issues. The player’s money is simply gone and they have nowhere to turn.

BonanzaGame.com is owned and operated by WoT N.V. Limesco Limited payment service provider, is licensed and regulated by a janitor in Curacao, under the useless toerag of a license: No.1668/JAZ. You might as well be licensed by a houseplant.