“Casino Manager” is one of the most challenging jobs in the gaming industry. Loads of players are totally cool. But then they can also be exhausting to deal with – unforgiving, confrontational – and always expecting freebies. Sometimes they’re total newbies who have not a clue about what they are doing – and they need to be hand carried every step of the way. And there are the rude and abusive players (see our fan mail to get an idea about what these folks are all about). One slip-up and your chat sessions or emails are going to be posted in the public fora.

Many managers toss in the towel – they don’t get paid enough for this stuff. 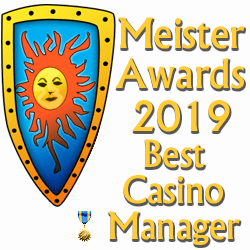 This award goes to Ben who has been with iNetbet, Kudos Casino, and iNetbetEU since the very beginning – 2003. iNetBet was the first RTG casino brought on to the site in 2004 – and the primary reason behind this was how smoothly this casino operation had been going. Now for the past fifteen years, Ben has been in smack-down mode when it comes to casino complaints. All of them were taken care of swiftly and professionally.

From the Desk of Max Drayman – Casinomeister Complaints Manager:

Nobody has handled complaints so professionally for as many years as Ben. He’s a machine, never fails me no matter what shit has hit the fan. Year after year after year. “He’s a good man, and thorough.”

That sums it up. I definitely feel the same way – each and every player issue that Ben has received from us was taken care of in a concise, logical, fair and expedient manner.