In 2010, we lost a true friend. Ted Loh was not only my webmaster buddy, he was a pioneer in the online gaming industry. He was also a person who always made himself available to lend a hand – to anyone. You needed help? Just ask Ted.

This year’s Ted Loh Humanitarian Award goes to an industry pioneer who clearly has made a difference in so many people’s lives. Sue Schneider is someone that I personally admire and respect. Here is her bio from SueSchneider.com

Sue Schneider, Consultant
Sue Schneider is one of the world’s leading experts on the internet gaming industry which she began monitoring in 1995. Starting as an owner of leading gaming consumer portal from ’95-‘99, she then launched River City Group, which produced the largest i-gaming events in the world as well as key industry trade publications, such as iGamingNews.com and the Internet Gambling Report. In July, ’06, River City Group was purchased by Clarion Events, one of the UK’s largest event producers and Schneider remained as CEO/Americas there until July ’08. She remains the principal of www.egamingbrokerage.com and consults on a variety of other independent projects in the industry. Schneider was a founder and served as Chairman of the Interactive Gaming Council (IGC), a trade association, from its inception in 1996 until 2004. She is a frequent speaker at international gaming conferences and has testified to both the US Senate, the US House of Representatives as well as the National Gambling Impact Study Commission in that country.

In 2009, I thought she was retiring from the industry after Clarion Events was taking over the events. There was even a party/roast for her in London prior to the ICE: London ICE trip 2009. Fortunately, she is still very much involved not only with the online gaming industry. It is always a pleasure to run into her and chat. But what is astounding is what she tackles while not attending these conferences.

For years, she’s been a Red Cross volunteer – and she was part of the disaster relief in Houston after Hurricane Harvey hit this year. She spent several weeks there helping families in the shelters to cope with losing everything they had. These floods wiped out so many communities.

And then there was Hurricane Irma which absolutely flattened and completely destroyed much of the Caribbean. On her own, she went to Barbuda to help with recovery from this destruction. She went on to Antigua to assist as well. You see, the online gaming industry owes so much to these Caribbean nations. Most of the companies that started off in the early days of online gaming were based on these islands, and their employees and their families were affected in a bad way. Sue used her contacts and connections to get things done. Sue’s efforts will not be forgotten here.

Besides these travels, Sue raises money for the St. Jude Children’s Hospital by getting people to sponsor her walking in the St. Jude Memphis Marathon. From what I have been told, she has raised $6240 for St. Jude’s. And there are the small hometown charities and events she attends. One of which is Dress For Success which is an organization that strives to “empower women to achieve economic independence by providing a network of support, professional attire and the development tools to help women thrive in work and in life.”

I admire people like Sue. If more people were like her, this planet would be a much better place. Ted would have been chuffed to acknowledge Sue for what she does, and proud to call Sue a friend. 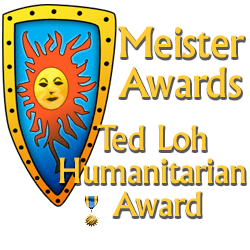